There is only one Aragon conflict that has been referred to Gravity DAO for mediation and we have yet to hear back from them regarding updates or an outcome. We will be sure to include updates with our June report.

Approved $880 with the reservation I am aware several people are actively contributing to this team, why are we not paying them? Volunteering is noble but it is not setting a good example unless our culture wants to continue to undervalue our people.

@Fintan I’ve submitted two typeforms to Gravity DAO and am aware several others have too. Can we get a recheck on those numbers and an update prior to June please, this funding was due to be reassessment end of month one.

pay 3x $1k on a monthly basis for the mediation service (based on the first month use, we might switch to a per-case payment)

I have been liaising with Michael and the other contributors to this guild re payment for their time and this should be confirmed, possibly today, it is on the agenda.

Regarding cases being mediated by GravityDAO, I had asked this last week and was told only one case, but I will follow up and will report on all with the June report.

Regarding your above message, I have adjusted the requested funds for May to include contributor hours for @MaxCaspar and @Incandenza ($480 each), as well as payment for the OpenSpace ($400) event put on for the Association.

Therefore total funds requested for May is ($2,240), as per the attached Financial Position

P.S. Based on the first two months, does it make sense to switch to a per-case payment as you have suggested @mheuer

pay 3x $1k on a monthly basis for the mediation service (based on the first month use, we might switch to a per-case payment)

GravityDAO have come to us and asked to adjust their per case fee to account for additional costs for more complicated cases, which were not considered in their original proposal. The original agreement included a flat fee of $1,000 per month to cover any incoming cases, and may have underestimated resources needed for certain cases. At the end of the first month, seeing there was only one case being worked on, @mheuer and @JuankBell felt if best to move to a per case structure. However, that case is ongoing, involving many more people and GravityDAO resources. Thus, we have requested a detailed breakdown of what their new fee structure will be and specifics on extra charges for, and definitions of what constitutes a complicated cases.

We hope to clarify this in this months report.

Thank you - I very much appreciate the update!

However, that case is ongoing, involving many more people and GravityDAO resources

I understand there might be a need to maintain privacy for those involved, however for the ESD and the community at large to be able to assess the relative utility of conflict resolution some insights would be very valuable:

As a potentially very valuable output of the work of the Umbrella initiative, it would be extremely useful to have a framework around how much resources (time, human and financial capital) are worth investing in resolving a conflict.

Apologies ESD Team for not using the required end of season report template in the original posting. We are amending and will post in the correct format at the earliest.

Thanks for your understanding. 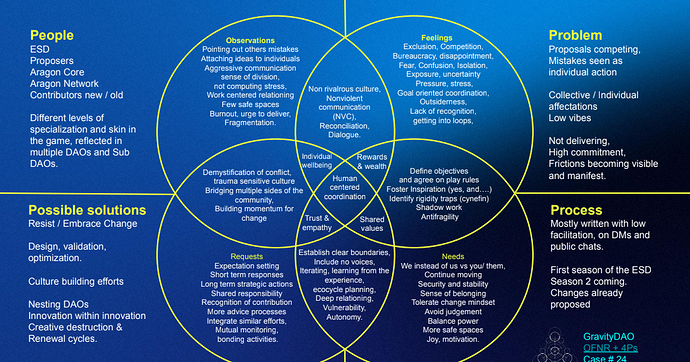 Could you please clarify the reason for increasing the price per case. If I understand correctly, this is a request to amend the initial contract?

So I understand the original 6k for organisational policy is cancelled, correct?

Beyond end of season is not the right time to request a new deliverable and new costing.

including a report on work and support provided to date, along with recommendations .

The outsourcing of this service to Gravity amounts to consultancy from my pov and for me, recommendations are inherent in consultancy reporting.100% thought a report from Gravity would have been here by end of the season. Gravity is funded via ESD and they are equally responsible for reporting on their funded work @JuankBell

You guys have support within the ESD to continue conflict resolution services. However, between umbrella and gravity, you guys need to figure out the service pricing model here and ensure that reporting is accounted for.

To me it would have been better to retain the $1000 per month model and if this had been discussed with the ESD, that would have been my advice. So I’m happy to consider releasing up to $3000 [TBD] in total for conflict services S1,

Over to @daniel-ospina & @fartunov on this. I will approve core contributor funding only at this stage

At this point, I can’t understand what was delivered and how much is the compensation expected, other than seeing a number of hours but an unclear link to the value delivered (not saying there isn’t one, I just can’t see it between all the notes on what was promised, what is no longer being done, etc).

Could you please clarify the reason for increasing the price per case. If I understand correctly, this is a request to amend the initial contract?

I believe we are the first DAO outside of the TEC that GravityDAO has provided this service for. Therefore, when they priced up this service I do not believe they fully understood the resources certain cases would require, and are now iterating their pricing structure.

We have been explicit with GravityDAO that a report and recommendations would be required, both for the current case in mediation and for the consultancy work they have requested payment for, before any funds would be released. The first draft of their repot did contain a pricing model but it requires further clarification, which we hope will be forthcoming this week.

We are learning much from working with GravityDAO, and hope we can continue the relationship into S02. However, we will also be looking at other conflict mediation service provider options, and we will include a recommendation of what we feel will bring the most value to the Umbrella Team and AragonDAO moving forward.

Sorry if there is confusion as to the compensation expected versus what has been delivered. Right now, the only original deliverable that has been cancelled is the organizational policies design.

The Gravity mediation service and Gravity consultation services have been carried out and will be completed deliverables once reports for both are forthcoming.

The following deliverables are completed:

The following deliverables are ongoing:

It would be very difficult assigning specific compensation for the 2 paid contributors for each of these deliverables, as we have not been recording our hours specific to deliverables, but rather the project as a whole.

I hope this is of some help to you, and we are happy to clarify further if necessary.

thank you for clarifying

As a recommendation @fmurphy, I see a lot of meetings and preparatory work that has yet to surface. So I hope we can see a significant portion of this translate into workshops, events, and generally impact over the coming cycle.

I recall being very excited when this proposal was created, requesting funding. The scope was straight-forward and actionable.

The deliverables/objectives were:
Fund mediation-as-a-service for 3 months while preparing the DAO to take-over this service internally through 5 interactive training sessions, elaborate on our org policy regarding mediation, and kick-start the umbrella team (2 members with part-time work for a “Few hours a week or via bounties”).

The work with the community would be monthly and over different time zones as indicated in the original proposal.

From my understanding the point was to have an in-house mediation team that has some training in this field and could be called upon in times of need (like an ombudsman to some degree) until that time have some pro’s from Gravity lead for 3 months. AND to have an updated policy with a report.

Is there a particular reason why this scope has increased, why we are still hosting campfires until Aug 19th and cross-guild culture meetings? Furthermore why a few hours a week has turned into someone working 20hours per week and 3 core members?

Sorry if i’m missing something and apologies for being forward.

Thank you for your reply and happy to try explain answer as clearly possible. Firstly, the scope of the team has not expanded much at all, though the reporting may give that impression. The Conflict Mediation trainings started later that expected and they are running until the 19th August (every 2 weeks), and the week in-between we are running a campfire to discuss the previous workshops learnings with the idea of knowledge and skill retention. The cross-guild culture meetings were initiated by Max with support from the Umbrella team.

There was a plan to expand the team in the original proposal which was not specific in terms of hours needed. Since the current 3 core members have joined the team, more coordination with GravityDAO has been needed than was perhaps originally expected. We are their first outside consultation client and their own processes are in development, thus requiring more time from Umbrella.

Finally, as per the original proposal, the focus moving towards our Season 2 proposal, the core focus will remain on conflict resolution, and the development of a small team within Umbrella to be able to manage conflict internally. This will require much more external support (GravityDAO) alongside Umbrella contributors to make this a reality.

I hope this answers your query, but please let me know if you have further questions.

Hey just to clarify, mapping against the original budget:

Please keep in mind there is $140 left for contributions towards the initiative for July and whatever additional work is remaining to assist Gravity DAO to ship the deliverables from their side (apparently extending into August).

I agree with the concerns raised by @Anthony.Leuts about headcount and scope bloating.

What is the deliverable output of those meetings?

I don’t understand what is this? Where is the $3,000 USDC coming from

Overall I would recommend the team to be very deliberate in defining the scope and activities to be shipped in S2 if there is an intention to request further funding. I believe in incentivising productive work, here it seems the team itself struggles to define what productive work means, let alone align with other stakeholders