Back in 2017 we first introduced Aragon’s Community Governance Model and Aragon Governance Proposals. Since then we have had many discussions among active contributors and community members about how to evolve and formalize our governance model as we move closer to launching the Aragon Network on the Ethereum mainnet.

Following on these discussions, we would like to formally introduce the first draft of AGP-1: The Aragon Governance Proposal Process.

We invite all members of the Aragon community to take part in the public comment and review of the AGP-1 draft proposal and help us shape its final form ahead of the next Aragon Network vote. This thread is the “official” feedback thread where I’d like to concentrate discussion, but you are of course welcome to share your feedback in whatever venue you’re comfortable with. Just make sure to share your feedback with me so I can take it into account during the editing process.

After a final review by the Aragon Association Board of Directors, AGP-1 will be scheduled for an Aragon Network vote including all ANT holders that will start at 00:00 UTC on November 15, 2018. A post will be published on the Aragon blog to let everyone in the Aragon community know all of the official details about the vote before it starts.

Please share any questions and feedback you have and help us make history with the new Aragon Governance Proposal Process!

A final note: the release of this first draft of AGP-1 coincides with the opening of a new AGPs repo so that we can start with a clean slate under this new proposed model. We are putting a hold on all activity in the existing aragon/governance repo and plan to archive that repo if AGP-1 is approved in the upcoming vote. Authors of AGPs in the archived governance repo who wish to maintain their proposals will then have a chance to migrate them to the new repo using the process outlined in AGP-1.

First of all, I really want to apply the work that Aragon at large and you specifically are doing.

The process largely follows Ethereum, as is pointed out at the end of the proposal. With all of the discussion around centralization at the hands of the devs who can merge pull requests, I wanted to ask what your thoughts are. The way this would seem to look in Aragon is that the Association is subject to votes that require a supermajority. That being said, the Association decides who the editors are, and the editors can merge pull requests, or move proposals from step 3 to step 4. My immediate paranoia is that this is a bottleneck or worse. Some possible visions of doom include editors resorting to extortion, being blackmailed, or being gophers inserted in order to advance a malicious agenda, or block a legitimate one. All of these processes can be done fairly covertly. What will Aragon do to prevent this?

This is a great question and cuts straight to what I think is the heart of this proposal. The current version of AGP-1 is by no means the final iteration of Aragon governance, but rather the next step along the journey to full control of the project by ANT holders.

Per our earlier discussion about Aragon governance, under this version of AGP-1 the Aragon Association has the sole power to put proposals on the ballot but ANT holders have the power to veto proposals. You can read the thread linked above for some of the rationale behind this, but TL;DR this ensures that 1. proposals that the Association does not approve of (let’s call them “bad proposals”) do not end up on the ballot and 2. ANT holders can still exercise their voice about the proposals that do get onto the ballot.

Over time, as we observe how ANT holders participate in the process and gain confidence in their ability to self-govern, more power will be transferred to them. This includes transferring funds and other assets to the Aragon Network for ANT holders to control directly. But this will be a gradual process, and not without additional safeguards to protect against bad proposals.

aj07 on GitHub suggests that Finance proposals be milestone based, and to allow ANT holders to vote on releasing funding at each milestone:

The big day is almost here! For 48hrs starting on November 15, 2018, ANT holders will have a chance to vote on whether to approve or reject AGP-1 as the “official” Aragon Governance Proposal process.

Before the vote, I want to give everyone an opportunity to ask me questions in real time about AGP-1. So I have scheduled a live Q&A this Friday November 9th from 9:00-10:00am PST to answer any questions you may have before the vote.

Why: So you can learn about AGP-1 before the vote on November 15th.

And finally, in case you haven’t had a chance to read AGP-1 yet, you can find it here:

@light AGP-1 states that there’s no minimum # of ANT required to participate. Does this mean non-ANT holders may participate?

Good catch, I don’t remember when or why that specific line got added but it should actually say:

Votes are token-weighted, so one ANT equals one vote, and at least one ANT is required to vote.

So I have updated the AGP-1 draft to reflect this clarification / correction.

A minor detail about this:

For Meta track proposals, the minimum support required for approval is >66% of all votes cast

Thanks for doing the math on this! I used 66% as the support threshold to keep it simple. So I would leave it as-is.

I support @bingen’s suggestion. 66% is an totally arbitrary number and when reading the number in a super majority vote context a lot of people will think it refers to 2/3.

2/3 is not arbitrary at all since it means that there must be more than twice support votes than rejection votes.

I will update the AGP-1 draft to adopt your/ Bingen’s suggestion.

Can you confirm that the technically-correct way to write this would be:

For Meta track proposals, the minimum support required for approval is >66.6666666666666667% of all votes cast, a “supermajority” with greater than approximately 2/3 support.

Video from the AGP-1 livestream Q&A is up on YouTube:

Sorry for the poor lighting

It’s probably best to listen to the audio without the video.

The AGP-1 ANT vote is live: 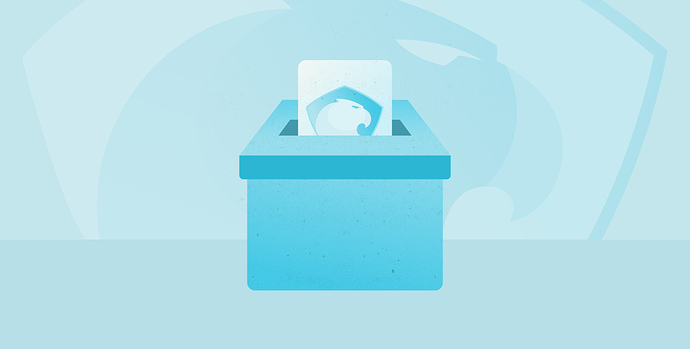 Final details about the ANT vote on AGP-1

Decentralizing Aragon community governance. The next step to adopting AGP-1 is a final vote by ANT holders