Hello all, hope you are enjoying your weekend. If you follow football, go Pats! (Please don’t crucify me.)

Just some weeks ago, Aragon completed their first vote, aside from the ceremonial vote for AGP-1. While this marks a major step forward for useable and live projects, it did raise what I consider to be an alarming concern that we are all aware of: Majority Rule (through ANT).

Noting the voting results, AGP-18 (chosen because of the personal stake I have in it) follows a Pareto Distribution as follows: 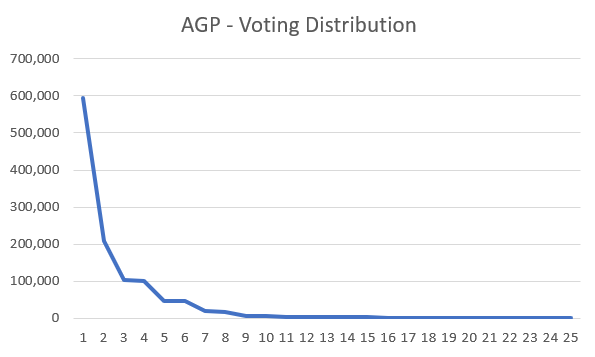 AGP-1 follows an even sharper distribution: 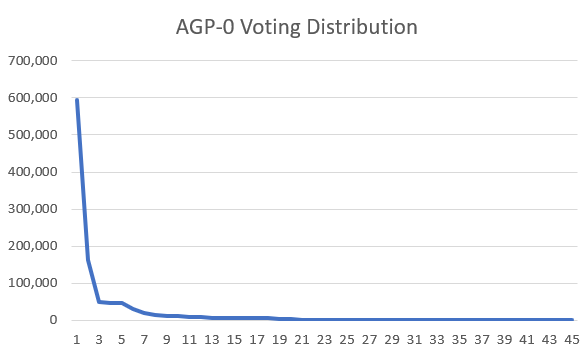 The implications of this are clear in my opinion. Despite the ethos of decentralization, going by voting power, the minority hold the majority of power. While I am grateful for these whales passing AGP-18, as the Aragon Network scales it may run into improper representation challenges. One could argue that if these challenges arise, participants can fork the network after passing a tipping point, but it will end up resulting in a pareto distribution of voting power eventually. Luke Duncan made an excellent post about quadratic voting as a mechanism to combat this very issue. I propose a complimentary solution: Dividing proposal into buckets that have different voting structures. Similar to how the House of Representatives in the US is based on population density in each state whereas the Senate has two representatives from each state.

More specifically, I propose a division of proposal into those that fall into a “House” structure, based on ANT holdings and those that fall into a “Senate” structure where each voter has equivalent voting power. While I am not certain on the basis for division, I posit some of the following methods for discussion: (1) Basing the division on what is at stake for the network, (2) Setting limits on what is being asked for, eg large amounts of money, (3) Allowing the AA to decide on a case-by-case basis as part of the AGP process.

I believe this will distribute power more evenly amongst voters as opposed to it being dictated by the amount of capital held without creating insurmountable friction between ANT holders.

I would love to hear your thoughts on this model.

I’d be curious to know what would be the difference between the current state and a more flattened voting power, from a game theoretical PoV. The project purpose is to enable people to create their own DAO, to test different governance models such as futarchy, leverage new ideas such as quadratic voting. I am not sure we should experiment with those within the project unless there’s an actual strategic reason to do that? What would it be today? A large token holder refuses to pass something someone liked a lot? That’s bound to happen. If the vision of token holders and a large part of the community are wholly misaligned, then a fork will simply need to happen. I have actually just commented on this here: What is the Problem the Aragon Cooperative is trying to solve?

While I’m very eager to see governance experiments within DAOs, what would be the purpose to have democracy within the project? I see this project as a tool that simply needs to have incentives properly aligned so it improves as fast as possible and remains operational for as long as possible. As long as the stake holders are aware that people would fork the network if they don’t take decisions that would benefit the users and where it would be more costly for users to fork and start over than to stay, all is good?

I’m very open to being wrong but I see everybody going in so many directions within our own governance and I’m just not convinced by this, because it seems to be for the sake of it rather than with a specific game theory aspect in mind. Aragon exists to let anyone create DAOs and experiment with governance; in my opinion Aragon itself doesn’t need to be more of an experiment than it already is.

In some ways this is already possible and beginning to happen with the AGP processes. The specific example is AGP-10, A community member proposed an alternative governance structure than the current AGP process (direct ant voting on finance proposals without association review and where anyone can submit proposals). Thus now there are two options to submit proposals, you can go through the community funding dao or through the AGP process, and each process has different processes and requirements for passing a proposal.

I think this approach to experimentation makes sense, If there is a compelling (to ANT holders) justification for trying a different process, it can be initially experimented with by creating the organization with the specific governance process and allocating funds through a finance proposal… In theory a finance proposal which transfers all of the projects funds to another organization can be used to effectively circumvent the meta proposal process (though I expect and hope that such a proposal would not go through the association review step

As far as the specific example of a bicameral process, I’m not specifically opposed to it, but I think that it is probably not necessary at this point. Users and active community members already hold tremendous implicit influence, as it is generally in ANT holders interests to prioritize proposals which make users most happy. Things like the Aragon Cooperative can help them organize and signal their position more effectively, but I think ultimately ANT holders as financial backers of the project deserve final authority in the AGP process.

From an implementation perspective, I agree that it is too early in Aragon’s scale where imposing strict divisions of governance structure is folly.

In fact, a strict bicameral process will not be able to effectively manage the fluidity and granularity of bespoke governance structures. As Luke mentioned, different structures and methods are already being propose vis-a-vis AGP10.

However, I still think there is an argument to be made against such disproportionate voting power between members:

The solution to mitigating plutocratic risk may be through defining different types of voting arrangements, quadratic voting, or another method altogether, but I think these models need to be tested early and fast so that when there is something larger at stake, Aragon has the appropriate tools and knowledge to assess.