The Aragon research team is uniquely qualified to develop a prototype of a censorship-resistant, privacy-first voting system for DAOs. This system is a critical missing component in the web3 space that requires a deep understanding of cryptography and math to meet its high security needs. The team has multidisciplinary skills and a track record of success that make them well-equipped to tackle this long-term project. Their work aligns with Aragon’s mission and strategy and will be a major focus for the team over the next 14 months, from January 2023 to February 2024. Funding this project will allow the research team to continue building on their strengths and make significant contributions to the field of web3 technology.

Why does Aragon need a research team?

Web3 companies need to understand math, cryptography, and computer science to keep up with the fast-growing technical innovations in the field. Leading organizations such as Aragon should also contribute to these areas of development and have teams dedicated to them. Building these teams takes time and requires multidisciplinary, knowledgeable team members who can collaborate and experiment.

The Aragon research guild was established in late 2021 with the goal of producing proofs-of-concept (such as OVOTE) by leveraging ZK (zero-knowledge) technology to solve decentralized governance challenges. Another goal is to facilitate both vertical and horizontal technology transfers to other Aragon guilds. The guild spent the first few months building the team, identifying areas of interest, and establishing a foundation of knowledge. In May, it set up its blog (https://research.aragon.org) and released its first software PoC: OVOTE. The support its mission, the AZKR guild follows the latest developments in zero-knowledge cryptography, experiments with existing tools and publishes research and training materials related to this area.

The AZKR guild adopted the objectives and key results methodology in September, with a focus on off-chain voting and private voting. During the first season, the guild accomplished several significant outcomes, creating software prototypes (e.g. blind-OVOTE) and production-ready tools (e.g. SHA512 implementation for Aztec’s Noir language), publishing technical documentation and training materials, and giving talks on private decentralized voting. Further details of our production are provided the annex Team production at end of this document.

In light of the Aragon Key Result for 2023 “Voters in Aragon have the option to vote anonymously” of the Objective “Reach defensible product market fit for App & Core”, from January 2023 to February 2024 the AZKR guild will focus its efforts on developing a prototype of a censorship-resistant, privacy-first voting system for DAOs, code-named CeresVote. This is a critical missing component in Aragon’s DAO toolset for enhancing basic participation rights of DAO members, such as privacy. Its development requires a deep understanding of cryptography and math to meet its high security needs. Building on our multidisciplinary skills, our previous work and the resources of this proposal we firmly believe that we can have such a prototype ready for integration by third parties (e.g. App & Core and Vocdoni guilds) by the end of the aforementioned period of time.

As CeresVote will be developed independently of existing ZK platforms, this will open up the possibility of ANT being used to help govern CeresVote, or to secure its infrastructure.

The main goal for 2023 is the development of a prototype for a censorship-resistant voting system for DAOs, internally code-named CeresVote (CEnsorship Resistant) with the focus on maximal privacy, verifiability (individual, universal, and eligibility), and decentralization. Such a voting system is an indispensable primitive for any project aimed at becoming a trustless governance hyperstructure like Aragon as it is fundamental for i) the safe participation of the DAO members in the decision making processes and ii) the legitimacy of the decisions taken. The system will use layer 2 ZK-rollups and recursive SNARK technology, and will be built as a COSMOS zone. Its main features will include census creation, voting on ZK-rollup nodes, vote aggregation and proof generation on ZK-rollup nodes, and on-chain execution of vote results on Ethereum or any EVM-compatible chain. The prototype will be intended for further development into a production-ready product, but some features and functionality, including user interfaces, may still be limited or incomplete. The AZKR guild also plans to research and potentially develop recursive and aggregated ZK proofs, which have the potential to be powerful tools with clear applications for the CeresVote project.

The AZKR guild plans to research and potentially develop recursive and aggregated ZK proofs, which are still in their infancy and have significant potential as a powerful technology. The guild aims to research the state-of-the-art of existing recursive tooling, theoretical research in the field, and suitable elliptic curves, as well as potentially creating additional recursive SNARK applications. Recursive and aggregated ZK proofs have clear applications for the CeresVote project, such as aggregating users’ ZK proofs of census membership and using recursion to chain ZK proofs and results. The guild will decide on whether to create standalone tools or contribute to existing toolsets, such as Arkworks, after the initial research phase which will take place during 23Q1.

POCs and implementations of cryptographic schemes

The AZKR guild plans to develop proofs-of-concept (POCs) to test the feasibility and functionality of concepts and identify potential challenges or implementation issues. One POC will be an experimental COSMOS blockchain with a simple voting system, and the guild also plans to experiment with connecting digital identity systems to voting systems. Depending on the outcome of research and the requirements of the CeresVote project, the guild may also develop additional POCs during the year. In addition, the guild plans to work on implementations of cryptographic primitives, such as the Poseidon hash, which is currently a missing feature of Aztec’s Noir language. This will contribute to the guild’s reputation in the ZK space. The guild expects to complete about one implementation per quarter, with the first being the Poseidon hash in 23Q1.

The AZKR guild has several other activities planned for the coming year:

To ensure the achievement of the goals of this proposal we will combine a long-term work plan base in the waterfall approach with the Objectives and key results (OKRs) methodology for quarterly planning and success evaluation -as we have done in the last quarter of 2022.

Table 1 presents the proposed work plan. This work plan will be periodically reviewed and updated when needed according to the outputs of the OKRs iterations, the research findings or other project development needs. The following chart shows a summarized version at work package (WP) and their lead. 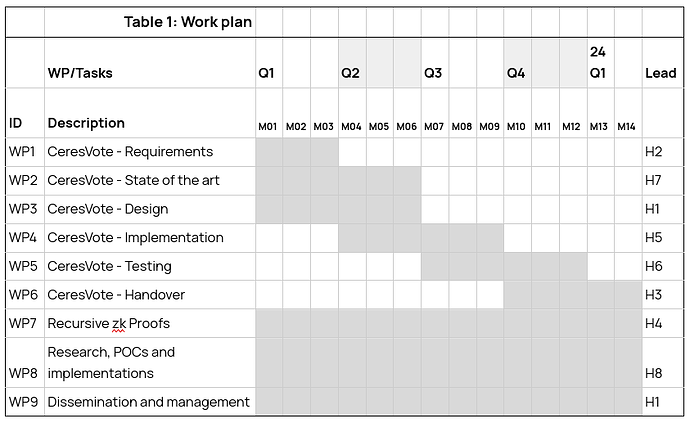 Full details of the initial work plan, including tasks, participants, and main outputs, can be found in this google spreadsheet.

The OKRs for the first quarter of 2023 (1st January - 31st March) follow. Please note that i) we use standard quarters, thus, the first two months (January and February) are not part of this proposal in terms of execution period and budget. AZKR-23Q1-O1 will take around 60% of the team effort, and AZKR-23Q1-O2 and AZKR-23Q1-O3 about 20%.

The Team Leads coordinate the work of the entire team and are responsible for representing the team, both internally and externally. However, they also take hands-on responsibilities in specific projects and thus contribute to the team’s production.

H1 - Head of Research. Previously served as a blockchain governance and tokenization expert at a European Body. Research interests include mathematics, consensus protocols and monetary theory.

Research engineers play a crucial role in developing proofs-of-concept (POCs) and prototypes. They are skilled in using complex cryptographic toolsets and may also contribute to the development of these tools as needed. In order to effectively carry out their work, research engineers must possess a strong understanding of cryptography and cryptographic primitives, as well as advanced software engineering skills. They may also be responsible for implementing schemes developed by cryptography researchers.

The fundamental researchers on the team focus on creating new cryptographic schemes and on providing mathematical proofs that these schemes are secure. They stay informed about current research in the field and play a key role in selecting cryptographic schemes for the development of proofs-of-concept (POCs) and prototypes.

H7 - PhD, Cryptographer. Previously Assistant Professor at a European university, where he remains active as an external expert in Cybersecurity. Research interests are in cybersecurity, blockchain, cryptography, and in particular e-voting, functional encryption and ZK.

Table 2 presents and classifies the most relevant risks identified and Table 3 the proposed mitigation measures. 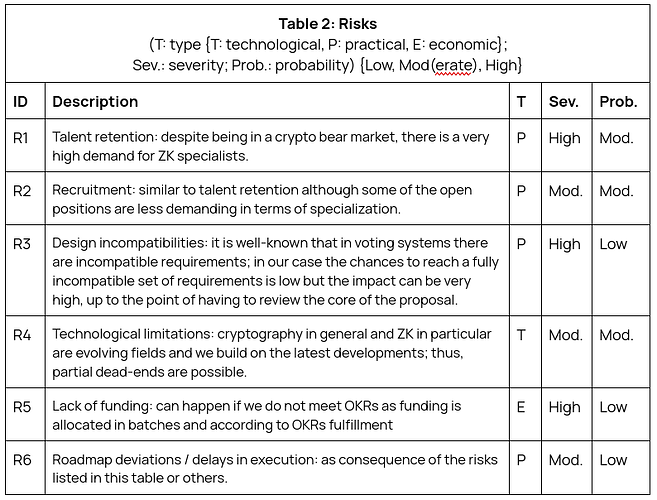 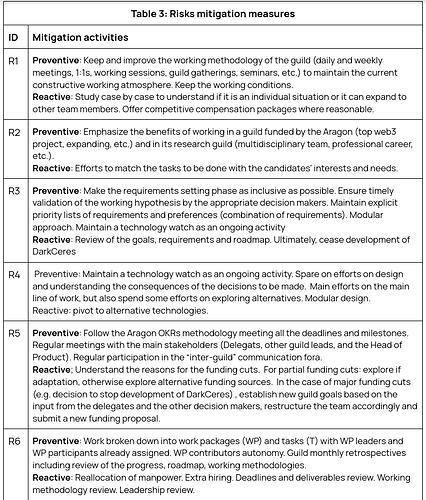 Table 3 shows the total requested funding. This budget is for a period of 12 months, from March 2023 to February 2024. The budget estimation was done according to the following criteria: Table 4 shows the budget distribution over the 4 funding seasons.

Following the efforts started in 2022, the AZKR guild will continue our collaborations with third parties (Aztec) and look for new ones according to the following rules:

Restricted access (internal notes for other teams in Aragon)

Makes sense. Your work is extremely important for the broad industry, and even more so for Aragon.

The system will use layer 2 ZK-rollups and recursive SNARK technology, and will be built as a COSMOS zone

I’m somewhat surprised to read this, as my understanding was that the rollups will settle transactions on Ethereum and not on its own app-specific L1. Any pointers about this decision?

Hi Luis, this is still very much about settling transactions and triggering funds transfers on Ethereum.

Rollups in general refer to proofs that are generated off-chain, possibly requiring significant computing resources. This is done so that the proof is as small as possible and thus less expensive to verify on Ethereum, under the condition that security is not compromised.

The unavoidable weak point of rollups is that the Ethereum smart contract designed to process proofs can only act on proofs that are submitted to it.

In some cases proofs can be definitive and the situation is quite straightforward. For example, in a 3-of-5 multisig, if a proof is submitted that 3 addresses have voted in favour, the situation is clear and a fund transfer can be initiated immediately.

However, in voting the situation may not be as simple. Imagine that ballots are submitted to a single rollup node, whose role it is to collect ballots and compute the proof after the voting period is over. Imagine that this rollup node is in fact malicious, and ignores some of the ballots received, based for example on the IP from which they were sent. The rollup node then generates a proof that excludes some ballots and submits that proof to the smart contract. The smart contract cannot know that this proof does not include all ballots cast. To mitigate this risk, additional fail-safe mechanisms must then be implemented: we can have several roll-up nodes (but then voters may need to submit ballots to several nodes); voters can monitor the proof being submitted and have the possibility to add their ballot manually to the smart contract if necessary (but we all know that voters will not all be as diligent); several parties can submit proofs, and the smart contract is able to aggregate proofs (at a cost of course), etc.

One reasonable solution to this is to have a rollup-chain, rather than just one or several independent rollup-nodes. The usual consensus mechanism will ensure that if at least 2/3rd of the nodes are honest, the rollup-chain will actually accept all ballots and compute a proof that takes all of these ballots into account.

Clearly this is not a panacea, but I think it’s an important element of making off-chain voting censorship-resistant.

The easiest solution right now seems to be a cosmos chain/zone, which is what we’re experimenting with at the moment, but this is not set in stone.