This is an awesome initiative. Really keen to participate in the Test DAO if at all possible so I can communicate how all of this works to the rest of the community.

Agree! worthy of Community Call to address questions build familiraity maybe a topic for one of your all-hands?

The demo is open to everyone!

Who else is super excited to be able to experiment with governance tooling and models in advance of the delegate deploy?!

maybe a topic for one of your all-hands?

Definitely, will mention it there and also direct the team to start creating awareness and educating the community on these topics.

I’ll be looking out for more info on this as well. Super excited 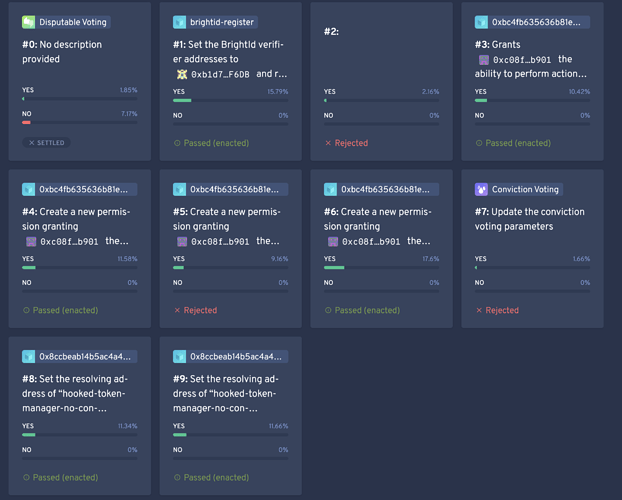 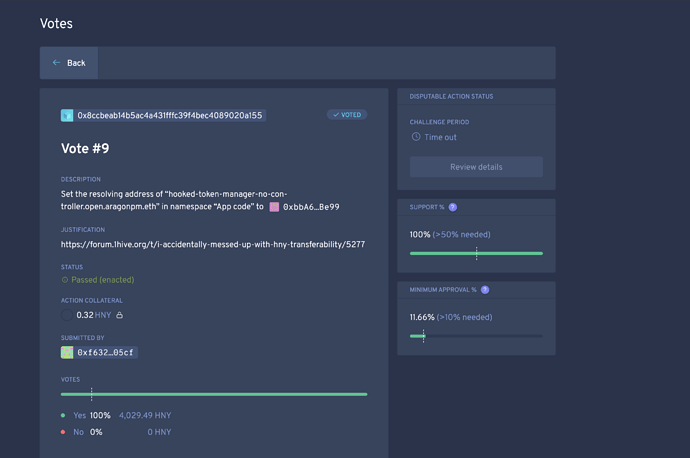 We aim to have the functional demo of the Tao Voting DAO by the beginning of September.

I have requested that the param debates outlined in this proposal be led internally by @Incandenza as a member of the AN DAO Community Guild. I would therefore like to request that we still provide the funding secured as $500 for param debates to the TEC in recognition of TEC project management for the development of the Commons Config. I understand that funding would accrue to the TEC treasury vs individuals @Zeptimus can you confirm please. dGov would provide equal funding to @Incandenza to facilitate the proposed debates. This would require 2/3 support and I would recuse myself from voting.

I hope that the TAO Voting DAO MVP is going well, can’t wait to try the first test DAO created with it

Considering the fact that AA is responsible for preparing the structure and setting the conditions to decentralize the treasury, I just wanted to publicly communicate that AA will ensure the continuity of this project and will be the entity evaluating deliverables and disbursing payments, while providing any “in-house” support needed in order to get to a production-ready state. Also, I’d like to comment that any design requirements should come directly from AA.

The timings are tight and the stakes high, so we need to be extremely well coordinated to ensure that this project is a success, across multiple stakeholders (proposal creators, tech leads, auditors, etc).

Have a play, look around, and see what others are talking about in terms of delegate voting parameters. Education may be considered an overhead here but imo this is actually a fun way to investigate and learn asych about the delegate voting possibilities of governance

During the param debates, the participants analyzed the advantages and disadvantages of various settings for the Tao voting delegate system. This is the proposal on which participants found consensus during the three meetings.

Note 1: The following parameters are meant to be applied only to financial proposals below a certain value (TBD). Participants in the debates believe that structural changes, such as those applied to the governance model, to the charter, or financial proposal requiring conspicuous amounts of funds, should follow more stringent standards, such higher quorum and support required thresholds.

Note 2: the third debate had a low number of participants.

Note 3: the present proposal is just one among the proposals that people can vote for by following this link - vote will end on Monday. This voting round itself is not binding in any case, but will only express the sentiment of the Community. The final decision will be made and ratified by the ANT holders.

Support Required: a qualified majority (4/7 = 57%): because a larger majority could mean less reasons to argue with the outcomes of the proposal, and the difficulty to reach the threshold may also lead to better proposals. At the same time 57% shouldn’t be a figure high enough to block our workflow.

Quorum: 0.5% as a starting value. Although we all hope that the delegate voting system will lead to broader participation, given the trend of past voting rounds we believe it is unwise to set values that we might be unable to achieve and thus fall into a stalemate. Our suggestion is to start low and increase the quorum over time in line with the treasury transfer and with the data collected from the first series of ballots.

Vote duration: participants believe that 7 days are enough for voting, provided that we keep at least two weeks of forum discussion before voting.

Delegate voting period: 3 days. Considering that the delegates with the most voting power will be paid to carry out their function, it is lecit to demand some celerity in casting their votes. Furthermore, this would leave three days for people who disagree with their delegate position to undelegate their tokens.

Quite ending period: 1 day. A sufficient time to avoid last-minute upheavals in the voting outcome.

Quite ending extension: 3 days. In case the swing falls on the weekend, it is good to have enough time for everyone to have returned to work and, in case, try to attract more support if they are not happy with the outcome.

(from debate 3) EXECUTION DELAY: 3 days, in order to grant a fair amount of time to people who want to rage quit in disagreement with the voting outcome, but not too long to slow down the process excessively

(from debate 3) PROPOSAL DEPOSIT: 1024 ANT. A relatively low value not to discourage the creation of new proposals. However, participants shared the idea that this parameter should be set as a percentage to the amount of funds requested (suggested value: 5%)

(from debate 3) CHALLENGE DEPOSIT: 128 ANT. Participants believe that money shouldn’t be an obstacle for anyone to challenge a proposal

(from debate 3) SETTLEMENT PERIOD: Participants believe that 5 days are enough to take a shared decision, and not too many to slow down the entire process.

Following the links below, you can go through the reasoning that led us to these params:

A Great Initiative I beleive, I Really like the Idea of this new type, May I know If I can test them out on my own now?

Attended an Param Debate and I must say Its going good, however need more participation.

I am curious when the next update for this project is? Very excited to see the changes!

Sharing an update here for transparency. We are still awaiting the demo from the Blossom/GM team, and are communicating directly with them to get this scheduled, as the early September stated goal has passed.

As most are aware, delegate voting functionality is a critical variable in the treasury transition, and is a dependency for key tech-stack/governance-related tasks our teams are working to define.

Blossom team is working hard to overcome some technical hurdles that likely caused this delay. We are hopeful we’ll be able to set a firm date as soon as possible with their team to review functionality and share with everyone the result.

Hey @awmyers
For further transparency, as this proposal was removed on request from the Proposal to Honour ESD Committed Funds Can I clarify please when the TEC funding will be released? The total funding approved in the proposal was USDC1000.

All work was completed in early September.

AA is responsible for preparing the structure and setting the conditions to decentralize the treasury, it will guarantee the Demo Delegate DAO project continuity and will be entity evaluating deliverables and disbursing payments directly.

@sembrestels already made the payment to the TEC.

As you know, the soft deadline for transferring the funds that was voted in this Voice vote is November 30th 2022. However, a requirement for any fund transfer is to have a secure infrastructure for a DAO that uses Delegate voting audited and deployed.

For the sake of transparency and accountability, could you share an update here on the status of the Deliverables of this financial proposal?

Regarding Next Steps, as discussed via Discord a few days ago, I believe it would be great if you could post the specifications of the Phase 2 defined with @juareth, including:

Having that clarity is very important for the current teams who are being funded by AA. Regarding those, AA will fund them directly until Feb 28th 2023 as it was voted in the Voice vote. After that date, teams should apply for funding to the DAO.

If for whatever reason the deployment of the DAO got significantly delayed due to the chosen infrastructure not being ready, we will have to use alternative solutions to go through the first funding season of 2023. This is obviously not ideal, as I think the best solution would be to use TAO Voting + Delay Apps for Aragon DAO, but we can’t disrupting teams with a governance block (proposals not getting voted in the needed time due to lack of tech infrastructure).

It would be great to get feedback from you guys asap, so we can review timelines and act accordingly.

@sembrestels @rperez89 Hello BL team! Can you provide an update for us on the timeline based on Carlo’s clarifications in discord and Joan’s statements above? We would really like something concrete so that we can be transparent with our stakeholders and teams, and stay on track with the overall DAO deployment effort.

I have also specifically tagged Sem at the most relevant bit in the other thread, which is to have some expiration on the delegation (to avoid the “set it and forget it” behavior). While it is not explicitly part of the current specs, there is a pretty wide consensus it is a net positive. Knowing the high likelihood that this will be a requirement could be helpful to the technical team if the intention is to go beyond a demo and use TAO as the new setup for the Aragon DAO. They are also obviously free to ignore that feedback.

Considering the fact that AA is responsible for preparing the structure and setting the conditions to decentralize the treasury, I just wanted to publicly communicate that AA will ensure the continuity of this project and will be the entity evaluating deliverables and disbursing payments, while providing any “in-house” support needed in order to get to a production-ready state. Also, I’d like to comment that any design requirements should come directly from AA. The timings are tight and the stakes high, so we need to be extremely well coordinated to ensure that this project is a success, across multiple stakeholders (proposal creators, tech leads, auditors, etc).

@Joan_Arus @AlexM @sembrestels also for transparency given that the AA took on an active role in managing the project’s success, can you advise if any additional requirements (design, technical, other) were added to the original ~ 8 week deliverables? Understand there is also a phase two for which information is requested but specific to the original proposal can you clarify in a simple one-liner