Draft Vote Text For AN DAO Transfer of Funds

That’s not the correct set of questions

To avoid creating more confusion, I’ve shared the correct list with you via PM (EDIT: it’s also visible in earlier comments in this thread).

Everyone, once @AlexClay has confirmed updating the OP, please make sure to carefully review the questions in case you have any final suggestions/clarifications.

Having spoken with Placeholder - The proposed vote will go live at 12 UTC on Friday the 3rd of June. Please have your ANT ready by that point

I understand that this is the way things should go forward to “adhere to the Charter”. Meanwhile, I recognize that there is no good logical reason beyond the quoted above. This is yet another example in a long sequence of incidents indicating how the current charter is purposefully overcomplicating things (not going to speculate, whether it’s due to incompetence, malicious intent, lack of empathy, or other motivation)

Despite having a wealth of context (both because of time invested in discussions and holding roles both in the AA and in the AN DAO) it is difficult to map my preference for a future state to how I should vote on the web of options available.

I think the questions have gotten much more confusing by making them binary and there are a bunch of potential vote result combinations that would lead to either an invalid/impossible situation and potentially require a further vote or disambiguation rules to clarify. I think that given all the attention this vote will get, having the clearest questions and using multiple choice is a must. If it took me a while to figure out what I would need to vote to express my preferred outcome, I can’t imagine how confused people who haven’t followed the conversations will be.

This is a purely signaling vote in which ANT holders will express their priority for what they think the Aragon Association should do. The AN DAO has no explicit power over the AA so therefore there’s no reason for this vote to follow the directions in the charter. We should go for the clearest possible questions that can only lead to valid results.

Despite having a wealth of context (both because of time invested in discussions and holding roles both in the AA and in the AN DAO) it is difficult to map my preference for a future state to how I should vote on the web of options available.

Perhaps you can elaborate on this a bit because, essentially, everything boils down to Question 1. Questions 2-5 are simply clarifying some details should Option 1 in Question 1 get implemented. If you’re finding it difficult to answer these questions, perhaps you can clarify the reasons and recommend a better way of phrasing them?

With regard to the function/importance of the Charter, I defer to anyone with more context/knowledge of the matter. If it’s actually not necessary to follow the Charter in the context of this signalling vote and there’s broad agreement that the current questions are not clear enough, then I’m seeing two options:

On a more general note, this discussion highlights the importance of rules about the rules. By unambiguously establishing a distributed governance/decision-making mechanism that everyone understands, the DAO can save a lot of time/confusion and operate efficiently. I’m hopeful that this is what the planned update of the foundational doc of the AN DAO will achieve.

I look forward to everyone’s suggestions on finalizing the current set of vote questions. I’m sure we’ll get there eventually

I have to agree here there are two questions that really don’t make sense in the current structure. Multiple choice is the sensible pragmatic choice

The Quorum and the Runway are the only two we need to change. As all questions have to be answered it means that the final result may be no extra runway and then 3 or 6 months will have to be chosen, so is creates uncertainty.

I honestly again agree this is a signalling vote to the association, the only binding questions for the DAO is question 1 and the question around the quorum. The rest will need charter changes or new votes.

We can also take out the 0.1% option at the end to make it one choice for the quorum change.

Can you add a concrete suggestion on what an alternative list/phrasing would look like + how a winning option would be established?

As all questions have to be answered it means that the final result may be no extra runway and then 3 or 6 months will have to be chosen, so is creates uncertainty.

Yes I agree with the principle but users will still have to choose three or six months, it seems confusing for users with little context.

This question would be better to be:

Question 5 - How long should the runway be extended after transferring the Treasury from the AA to the AN DAO for the core team (beyond the chosen extension, funding would be allocated through a delegative ANT voting system, as described here )?

Essentially merging question 4 & 5 in to one.

And how would you establish the winning option? As an example, let’s assume the following result:

In this particular case, among the options provided, 60% of ANT participating is against a 6-month extension. Are you suggesting that it should be considered the winning option regardless?

PS. I don’t want to belabor the point, but I do think it’s important to have clarity on how the winning option is established in a multiple choice question. Also, I’m personally not tied to any particular formulation as long as everyone is on the same page when it comes to understanding the questions and interpreting the results.

I would consider the winning option being the one with the highest participation as most elections go the highest % wins, this is maybe not as black and white as I think though.

In the merged question though, if the majority is against then the vote will be higher than 50% will be No. If it is anything less that then the winner is the one which has a higher % between the two runways.

Agree to not labour the point. 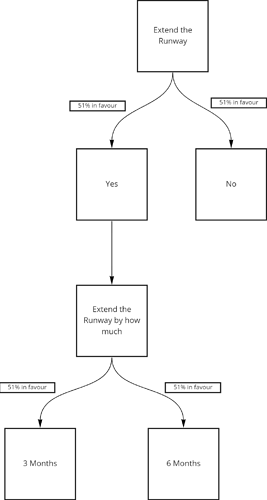 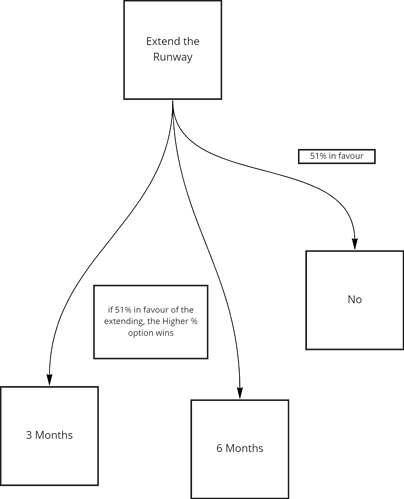 Thank you for these visualizations. As you can see, the problem with a multiple choice question is that it doesn’t capture the preference between 3 vs. 6 months of those voters whose first choice is No Extension. In other words, depending on the results, an assumption beyond what the results are saying may need to be made on whether the majority of ANT participating prefers a 3 or a 6 month extension if these were the only two options. If folks don’t see this as a problem, then fine, I’m happy to leave it at that. However, if the goal is to get a clear answer on what the majority of ANT participating prefers, then there are two options:

In this case, 3 months would be the winning option if we assume that those who chose No Extension but lost to the majority would prefer a shorter extension to a longer one.

@joeycharlesworth @jorge @luis Perhaps the AA can unambiguously share whether it prefers dual or multiple choice questions and, if the latter, how it would interpret the results of a multiple choice question (i.e. whether the option with most support wins, even if the majority has voted against it, or whether it would apply an additional assumption, as described under point 2 of my previous comment). Once that’s established, we can finalize the questions accordingly.

there are a bunch of potential vote result combinations that would lead to either an invalid/impossible situation and potentially require a further vote or disambiguation rules to clarify.

I don’t actually see this issue with the current set of questions so a concrete example would be helpful.

From what I understand it is the final option that is not clear if both options are yes. You could have a scenario of both 0.1 and 0.3 winning, which would make the vote unclear.

That’s the only one and I would actually recommend changing it to the same format as the runway question, i.e. start with a Yes/No question on whether to change the quorum or not, and then follow up with a choice between 0.1% and 0.3% (which can be be considered irrelevant if the majority prefers to not change the quorum).