This topic is to retrospectively request funding for work done by Chris Hobcroft at ETHBerlin from 22-25 August 2019, and beyond.

Requested amount - I would like to open this to suggestions from community, for what amount to request as a donation from the Community Funding DAO.

Please propose an amount in a comment below, which you believe represents the value delivered. Bear in mind that this was 4 full days of prep, execution and follow-up, with little sleep, plus expenses for being in Berlin.

Here is a breakdown of activities and deliverables: 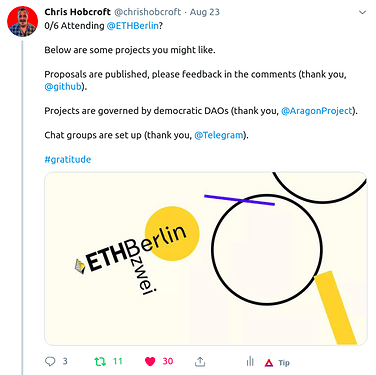 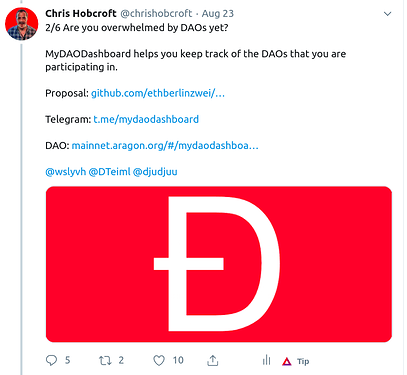 Here’s a photo of the combined team for Hackathon DAOs: 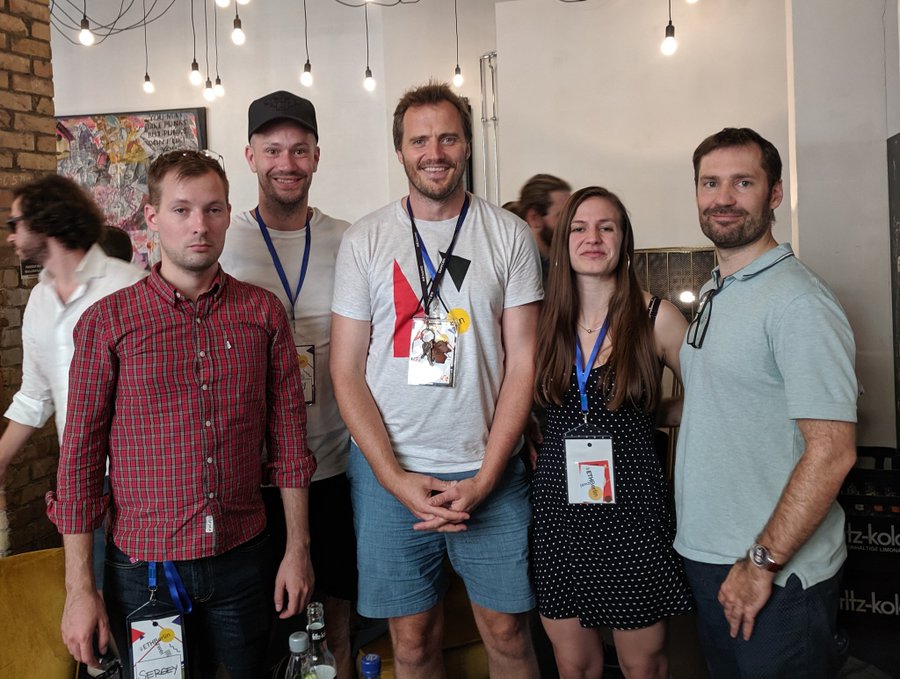 And finally… one team member (Santiago Siri from Democracy Earth) managed to secure double the voting weight of other vote holders, and launched a Twitter thread to attempt to resolve this, which gained 4 retweets and 15 likes.

Its cool to see this and I hope this will spark an interesting discussion!

I think there is a bit of a tension between:

I think what Chris did at EthBerlin was rad, and I would like that effort and value to be recognized in some way. I would also like to create a culture that encourages this sort of self-motivated value creation to grow and continue, even more than might naturally occur in a vacuum.

I’m happy to support this proposal, both because I think what Chris did added a lot of value, but also because I think this post is adding value as well. However, I would generally not like to see this become the norm in terms of how these types of contributions are typically rewarded/negotiated…

We have actually thought about this quite a bit in 1Hive, and as a result we have broken up compensation into different buckets (task-based bounties, pre-agreed time commitments and payments (payroll), and ad-hoc community contributions).

The latter is the most relevant to this topic… We are currently using Autark’s Allocations app on rinkeby for this, though we plan to migrate the balances to mainnet eventually, so these tokens do have value despite only currently existing on test-net. The process and rationale for the approach is described in our contributor guide.

One of the nice things about the approach is that it removes some of the politics out of valuing specific contributions on a one-off transactional basis. It also doesn’t make people feel like they are making an assessment on the market value of their time/effort.

The payout each week as a whole is fixed and it is the value relative to others contributions in a given week that is being assessed. You may do something really cool, but if someone else does something even more awesome, they may end up getting a larger slice of the weekly allocations then you… On the flipside, just being active in our chat, participating in discussions, and generally being helpful is sometimes enough to get a decent chunk of the weekly allocation.

The goal of the process is to reward people for things they maybe would have done anyways, or perhaps encourage them to do more things voluntarily without necessarily an expectation of specific remuneration. We want the weekly allocations to feel more like a thank you or an acknowledgement of value created rather than as an explicit payment for services rendered.

We have a nominations channel in our keybase, where people can give shoutouts and show their appreciation for one another based on things they have done above and beyond their normal obligations or tasks, if you get nominated you get added to the next weekly allocation vote.

The allocation for this week currently looks like this.

image1439×393 16.2 KB
. @onbjerg has been doing some amazing work on Apiary, without any sort of funding or remuneration, we could give him all of the rewards and it still wouldn’t come close to being enough compensation relative to the effort he has put in. @Aaron took it upon himself to start working on a deployment template and doing some QA, without being asked–I thought this was cool so I put most of my weight behind him this week.

Anyways, all this is to say that I think we can do a better job in the wider Aragon community of acknowledging and rewarding informal contributions and encourage community members to take initiative and create value in a permissionless fashion! I don’t really think the CFDAO is set up in a way that really works well for that, but hopefully this proposal helps shine a light on the short-comings that currently exist and perhaps pushes us to improve!

@chrishobcroft thanks for doing awesome stuff! If there was a community allocations vote I would totally throw down for you. I wasn’t at ETHBerlin tho so I’m not really qualified to weigh in on a dollar amount for your contribution.

Hopefully some amounts will be suggested for how much to request from the Community Funding DAO.

amazing work chris!! it was very nice to meet you in person and have meaningful chats about Aragon and its community.

during the times of the AragonCoop, a rate of 300 DAI per day was an accepted amount… I’d go with that!

BTW @chrishobcroft I would personally love to see the Uniswap DAO integration you created with the CFDAO… what do you think? Would it worth a new AGP to do this??

Thanks for the feedback @sepu85.

So, it’s been 15 days since I launched the proposal - but I didn’t receive any suggestions for how much to propose for a transfer.

I will wait another 6 days, then it will have been 3 weeks since the original post.

If you have any suggested donations for my work, please comment below.

I’m a big fan of the work @chrishobcroft dose in the community. The livepeer App, Empower The DAO, all the fantastic stuff done at Berlin, as well as being a steadfast ambassador for Aragon.

But I don’t really like the way this proposal has been framed. I have put off weighing in here hoping others who attended would chime in. Any way my 2 gwei

If this was a request for expenses incurred travelling and staying in Berlin then there would be no problem. I don’t even mind that this is a request for funds over and above that because there was real value-added and it is not just a one-off, your consistent with it.

My problem is asking others to put a monetary value on the time put in. It is a little awkward. I don’t want to say an amount and it is perceived as too low nor too high. Furthermore, I attend so I can’t really make a fair assessment in any case

In any case I think you should submit a request. And I’ll support your request because you did an amazing job

I been hesitating on comment until now for the same reasons as Aaron stated.

I have no doubt about the value you have created during ETHBerlin Chris and I’m sure you will be more than fair with yourself so I think that opening a request for founding in the CFDAO for the amount you believe is fair is the way to go. I will support that proposal without doubt.

At the same time I suspect that you decide to do this post to help push further the way we are rewarding the community as a whole and not only people working full time in Aragon. I like that and I think we are in the right direction in different fronts (e.g. 1Hive model, Autark’s Project app, CFDAO, Community Rewards DAO) nevertheless seems like is not enough. Hope we can have a better instrument in the coming months.

love it when there are opposing opinions!!

Chris, I think you are the only one that could make a subjective statement about how much your time and effort could worth in DAI. I’d suggest you not to wait any longer, make your proposal and let’s see how the community react voting on the CFDAO.

Perhaps a nice middle ground here is to have a dedicated community funds pot that does a single payment of say 1k DAI per month to just 1 individual/team that made an exceptional contribution that month. The dot voting app could then be used to reach an overall consensus on who that individual/team should be.

Whist this wouldn’t guarantee payment for ad-hoc/informal contributions, it would nonetheless still reward those individuals/teams that went the extra mile and avoid creating a transactional culture.

That is basically our AGP. Except it would not reward one contributor in a winner takes all competition. The Dot voting app is for expressing weighted preferences, I’d dose not give binary desitions

If your interested, we will start testing the configuration of the DAO and the limits if the apps this week. It would be great if we had you onboard

Thanks @sepu85, I’ve been trying to come to a decision on how much to request.

It made me think of this article I read recently: https://www.bbc.co.uk/news/business-49677147 it’s nice to see this kind of thing happening in the traditional world of employment.

So, it’s been 15 days since I launched the proposal - but I didn’t receive any suggestions for how much to propose for a transfer.

Hi @chrishobcroft, I see that @sepu85 has suggested an amount:

during the times of the AragonCoop, a rate of 300 DAI per day was an accepted amount… I’d go with that!

A vote has been created for the Aragon Network Token holders to decide upon: