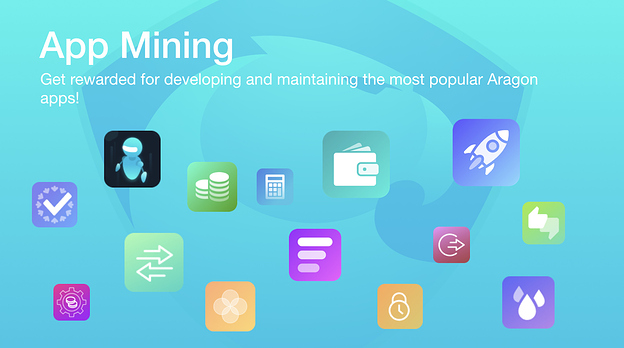 AGP-104 approved development and execution of an App Mining program intended to reward Aragon App developers for publishing and maintaining applications based on usage KPIs.

The proposal offered an example set of KPIs to illustrate how we could define an Aragon App score and distribute a fixed budget amount between application maintainers. However, as indicated in the proposal, we want to have an extended discussion to make sure the metrics we choose are not easy to game and serve as a good proxy for the value the application is bringing to the Aragon community.

While the current budget for App Mining comes from Aragon’s treasury, it is important for the program to create more value for the network and ANT holders than it costs. To ensure this is the case we want to make sure the KPIs we pick either directly relate to usage fees that are collected and allocated to the program, or are strongly correlated with increasing price of ANT. From that perspective the following might be ideal:

However, these services have not launched so the initial version of App Mining will need to rely on KPIs which are more indirectly related to value accrual and adoption of the Aragon Platform:

This approach seems the most straightforward and practical, but I am interested in suggestions which might provide a more direct way to measure the individual utility value of an Application.

If we only use KPIs that are directly linked to quantifiable value accrual to ANT it may not be possible to game the App Mining program by skewing the organization KPIs.

However, if we use a metric like AUM or Activity Volume on Ethereum, it’s possible that we may see people creating fake applications and/or fake activity in order to secure an app mining reward. Initially we will manually review payouts and flag anything suspicious, ask for community input, and take action if appropriate. In the future, this process could be handled by the Aragon Court.

Initially I propose creating an organization score weighted based on the following KPIs:

To compute the organization score each KPI would be normalized using as a ratio across all organizations, then KPIs will be combined into a single score using a weighted average.

Both Organization Scores and Application Scores will be re-calculated periodically and displayed on apiary.1hive.org.

To compute payout amounts we will use the application score to sort applications into a ranked list. For each payout cycle, there is a determined “pot” of total earnings that will get paid to apps, set by AGP-104 at 100K ANT. The top app gets paid 20% of the total pot. So, for a pot of 100K ANT, the top app receives 20K ANT. The next app gets paid 20% of the remaining pot. The remaining pot is 80K, and 20% of that is 16K ANT. This process continues until either every app has been paid or the payout amount is below 200 ANT, whichever comes first. 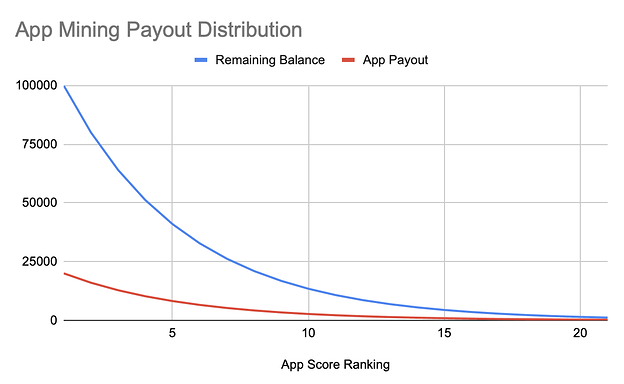 An alternative approach which may result in a broader distribution of App Mining payouts would be to simply payout the App Mining budget proportional to the App Score, keeping the same minimum payout amount.

Thanks @lkngtn - awesome to see this taking shape

Do you have already have a Google sheet/excel doc that includes the suggested parameters above? Might make it easier for everyone to understand.

It would also be great to see a simulation of the app mining rewards applied to existing Aragon apps on mainnet. That way, the community (and perhaps most importantly the teams that have already built apps on Aragon) can see what share of the rewards they would get, given historic activity.

Not sure how much work it is to create this, but happy to help if needed.

Do you have already have a Google sheet/excel doc that includes the suggested parameters above? Might make it easier for everyone to understand.

I wanted to try and reach rough consensus on which KPIs should be explored, then we can create some queries that can be output into a spreadsheet for the purposes of exploration.

It would also be great to see a simulation of the app mining rewards applied to existing Aragon apps on mainnet. That way, the community (and perhaps most importantly the teams that have already built apps on Aragon) can see what share of the rewards they would get, given historic activity.

Once we have the KPIs we want to potentially include in the Organization and App Scores, we could simulate how the scores are computed based one weighting parameters, and how the payout distribution would work under various payout policies.

So my question for everyone in order to proceed is:

Do we have a list of all smart contract events somewhere? (I think “Events” is the right term, could be wrong). Might be easier to see a complete list of data outputs to decide which could be suitable data inputs.

We can’t compile a list of events for apps since they are app-specific and thus not knowable ahead of time. There are no standard events or functions for apps in general, there are only standard functions and events for the kernel.

The way we track activity is using transaction tracing. For every transaction in a block, we go through each of the steps in the trace (also called “internal transactions” on Etherscan) and check the destination for that step.

If the step is to an address of an app proxy that we know of, then we count is activity for the organisation that owns that app and the app itself. We will show this activity to the users as well, with their Radspec descriptions, sort of like a Facebook or Twitter feed.

Another important question that came up in the pre-agp discussion thread is how to handle “core” apps like Vault and Tokens, and how to handle apps like “Agent” which have a history of contributions from multiple groups already.

I would love for @jorge to share thoughts as currently these apps are published by A1. Personally I think it makes sense for beneficiary of these apps to be DAOs which can use the funds to coordinate improvements or enhancements on these apps.

In general I think it makes a lot of sense for most apps to be maintained by an App DAO, but I think that can be left up to the discretion of publishers.

Both Organization Scores and Application Scores will be re-calculated periodically and displayed on apiary.1hive.org

If the example organization score is 22.5% and has 8 apps installed, the organization would contribute 2.81% to each app’s score.

What I understand here is: no matter the difference in activity between apps, the organization score would contribute equally to each of them? Is that due to technical limitations in the granularity of the information that we can obtain?

What I understand here is: no matter the difference in activity between apps, the organization score would contribute equally to each of them? Is that due to technical limitations in the granularity of the information that we can obtain?

Not necessarily a technical limitation, we can compute activity on a per-app basis given the methodology we plan on taking. However, its not clear that it would be a particularly fair metric in the sense that certain apps may produce a lot of activity volume (eg arbitrage on fundraising, or the many transactions required for voting apps), but they are only really useful in the context of the other apps installed in the org. For example one finance transfer that gets voted on may produce lots of voting app activity, but a voting app in an org without a finance app might not produce any at all.

So while we can measure raw activity on a per-app basis. It’s not clear that on an individual app basis activity is a good proxy for standalone utility.

One way I’ve thought to try and better understand the relative utility value is to start with the organization score, and then have the organization use an “equalizer” style interface to modulate how how their weighted contribution flows to the apps they are using. However, this may introduce other challenges and is significantly more complex to implement.